The skull is divided into two parts Neurocranium (cranium that encloses the brain) and Viscerocranium (bones of the face).  The neurocranium is the part of the skull that expands to accommodate the rapid growth of the brain during the first few years of life.  It is subject to deformation and reformation.  Cranial remolding orthoses work directly on the neurocranium to restore normal cranial proportion and symmetry.  A secondary effect of a cranial remolding orthosis is the correction of symmetry of the viscerocranium as well.

The infant skull doubles in size by six months of age and doubles again by age two. The skull is easily deformed when subjected to prolonged external deformation forces while the brain is growing.  The fastest brain growth typically occurs between birth and eight months of age.

What is Deformational Plagiocephaly?

Plagiocephaly is a flat spot which can develop on the back of a baby’s head.  It might be most noticeable when looking at a baby’s head from above. The cheekbone and ear on the flat side may also be pushed forward.  This doesn’t cause brain damage or interfere with a baby’s development.  Varying a baby’s head position while lying can help. If it doesn’t improve by age four months, a molded helmet might be necessary.
Deformational Plagiocephaly is often accompanied by torticollis which is the shortening of the sternocleidomastoid muscle.  1 in 300 incidences of deformational plagiocephaly are reported at birth when torticollis is also present.  Deformational Plagiocephaly is most commonly presented on the right side but can be presented on either side.  Right side plagiocephaly is characterized by right occipital flattening, right forehead bossing, right ear shift forward, left occipital bossing, and left forehead flattening.  Additionally, facial asymmetry is usually associated with this diagnosis.  Deformational Plagiocephaly has no presence of synostosis of the cranial sutures and is more common in males (68%).  The causes of Deformation Plagiocephaly are sleep positioning, premature births (NICU positioning), congenital muscular torticollis, restrictive intrauterine positioning, cervical abnormalities, and birth trauma.  It is also more common in multiple births.

Scaphocephaly is characterized by a long and narrow head shape, sometimes caused by consistent positioning of the baby on its side. Like brachycephaly, scaphocephaly is a deformity of proportion. Premature babies are particularly prone to this deformity since their skulls are so fragile and a side-lying position is often used in the Neo-natal Intensive Care Unit (NICU) for easy access to monitors and other equipment.

“Tummy to Play – Back to Sleep”. Practice alternative positioning when awake and supervised. Nearly 26% of parents never use the prone position for playing.  If your child is on their back with eyes open, turn them to lay on their tummy. Use car seats for car safety, not as a holding, sleeping, or carrying device. Stretch and massage your child’s neck.  This will help increase trunk and neck musculature.  Position the distraction toys on the same side as the occipital bossing.  This will encourage the infant to look to that side and allow for correction of the involved side.  The best thing you can do for brachycephaly is to keep the infant off of their back as much as possible during the day with supervised tummy time and supported sitting without head support.

Up to 50% of infants are born with a visible head shape deformity.  Even with perfect procedures to reposition and stretch, babies can still develop or continue to have head shape problems.  In these cases cranial remolding orthosis treatment may be necessary.  Asymmetry per se, is not abnormal.  The magnitude of the asymmetry determines whether the head shape is abnormal.  To determine if you should seek a referral to a Craniofacial Specialist consider the following: Does your child lack head shape improvements after positional therapy/tummy time?  Your child’s physician is unable to differentiate or suspects craniosynostosis. 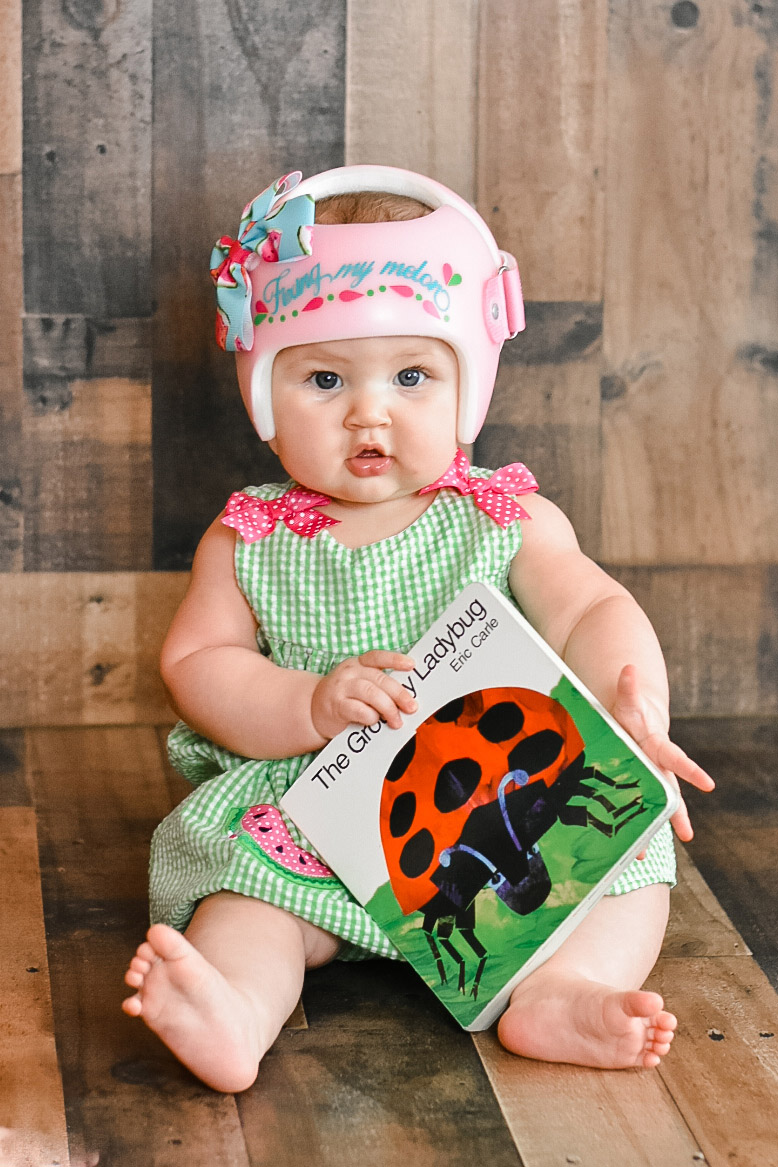 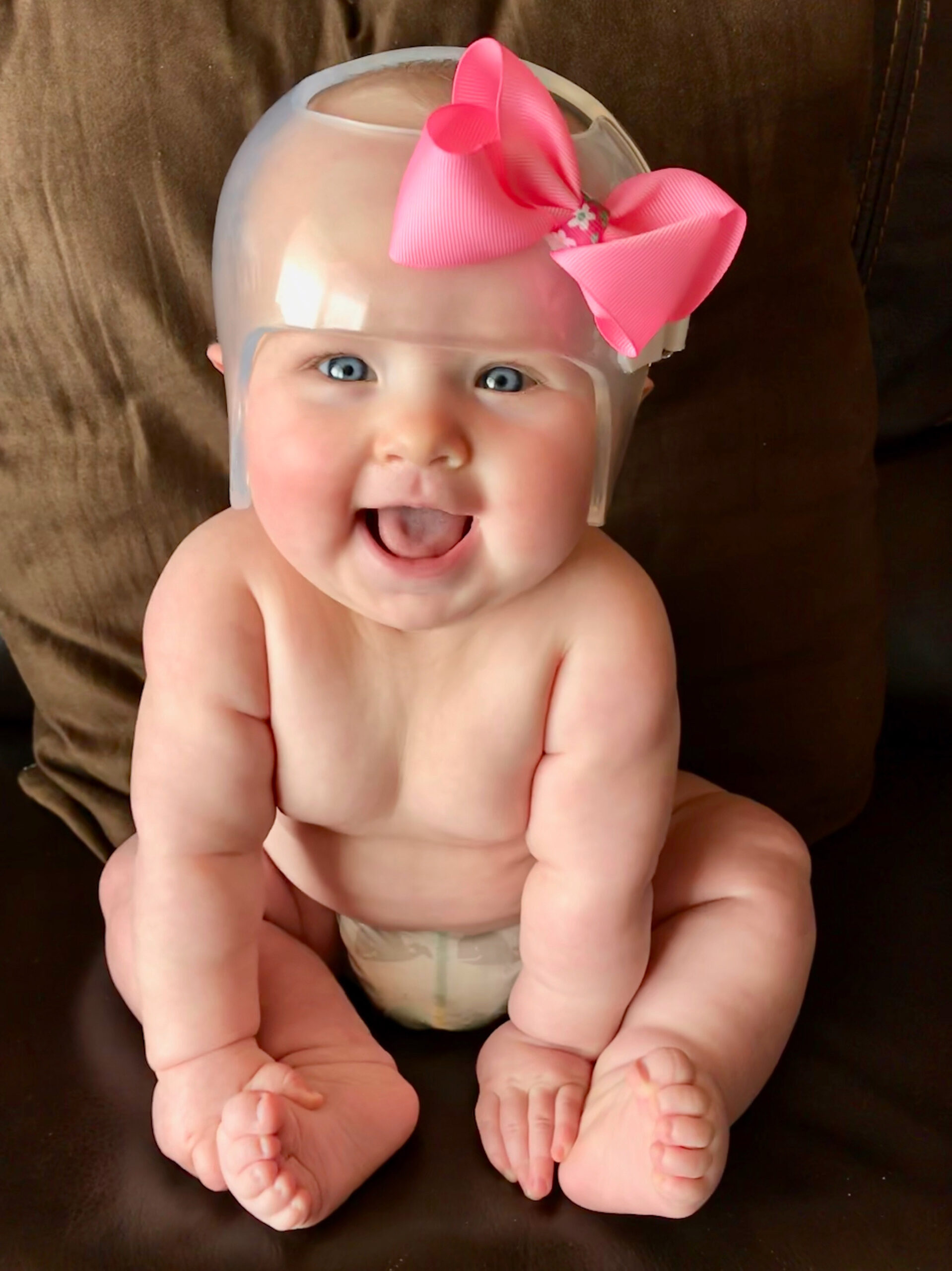 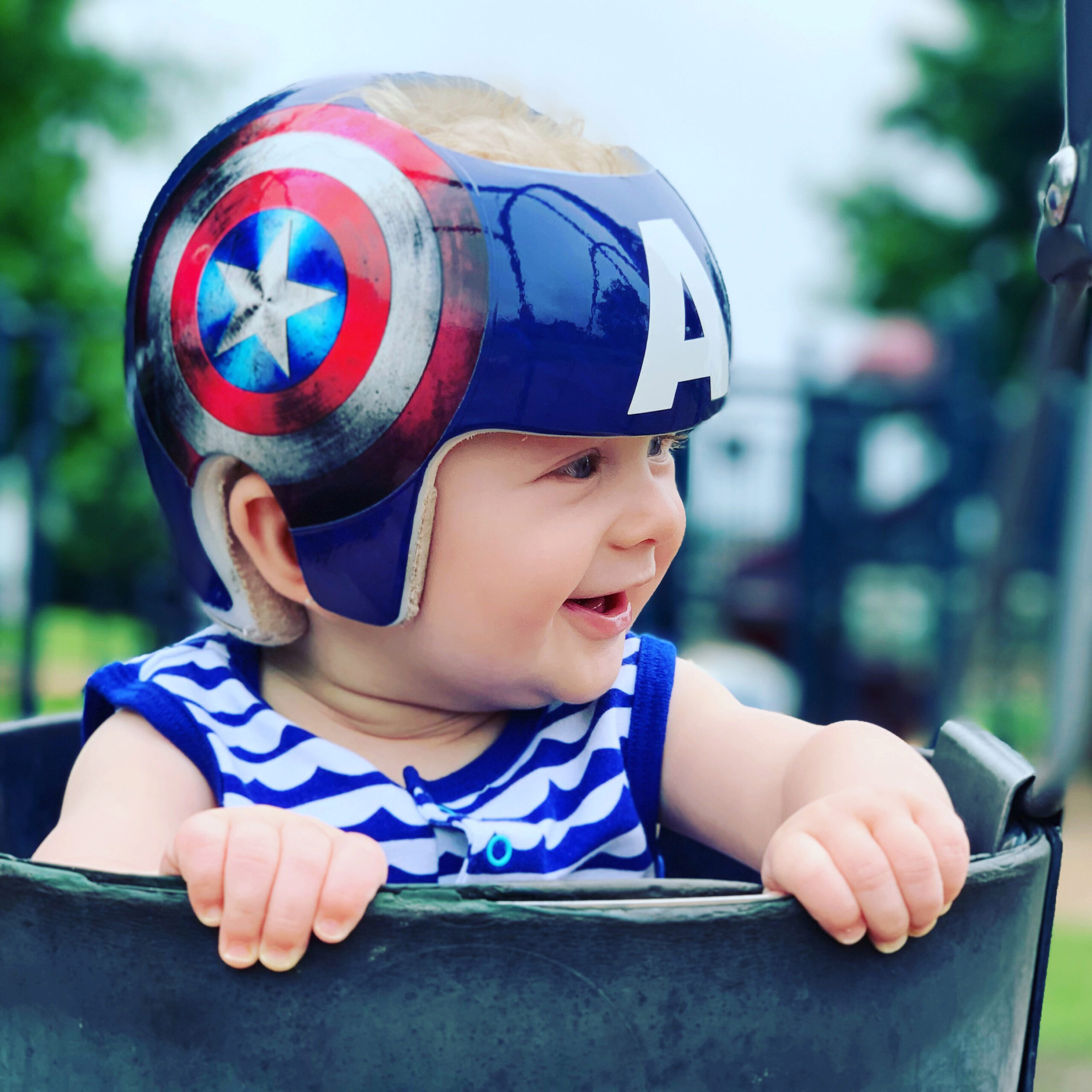 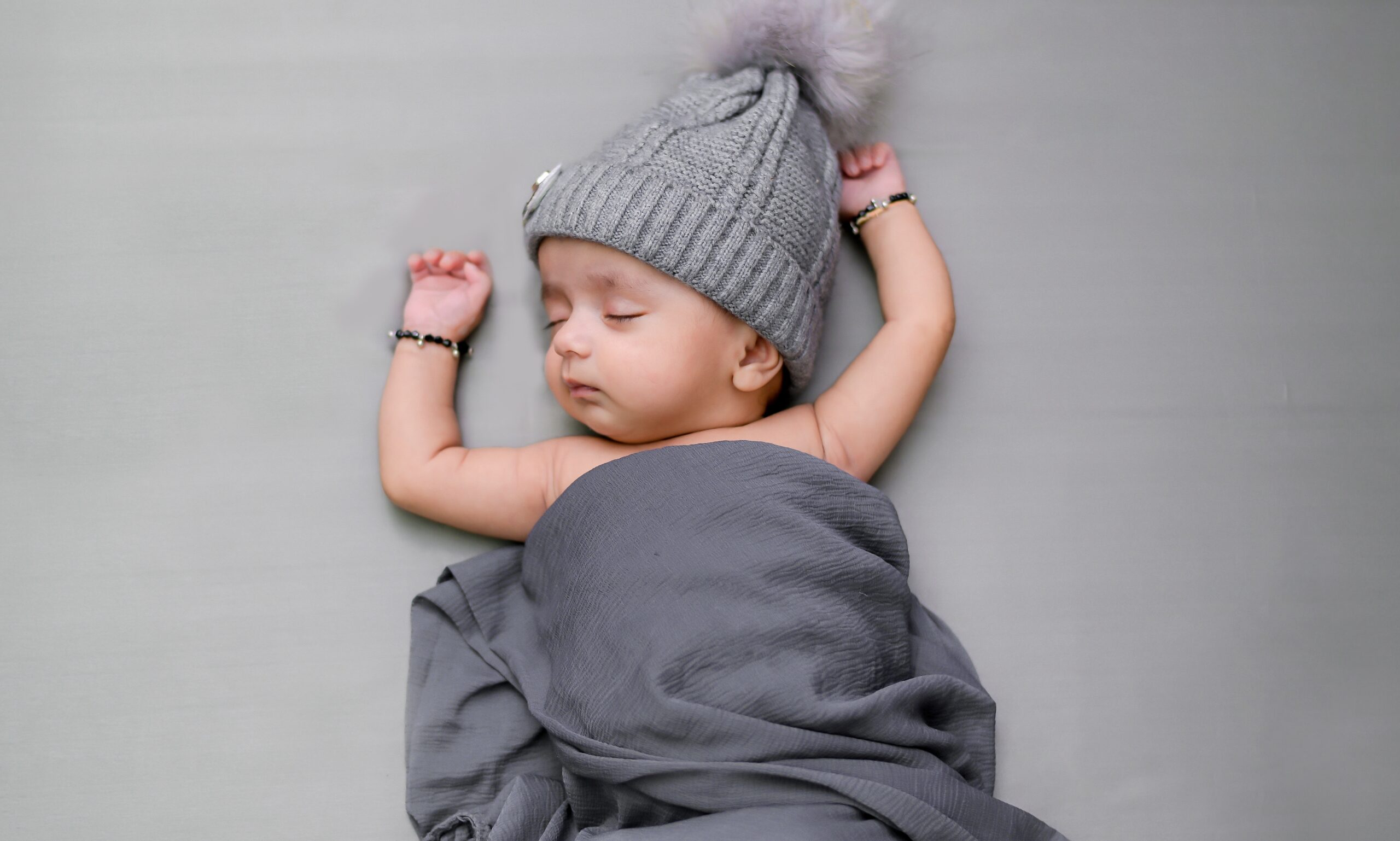 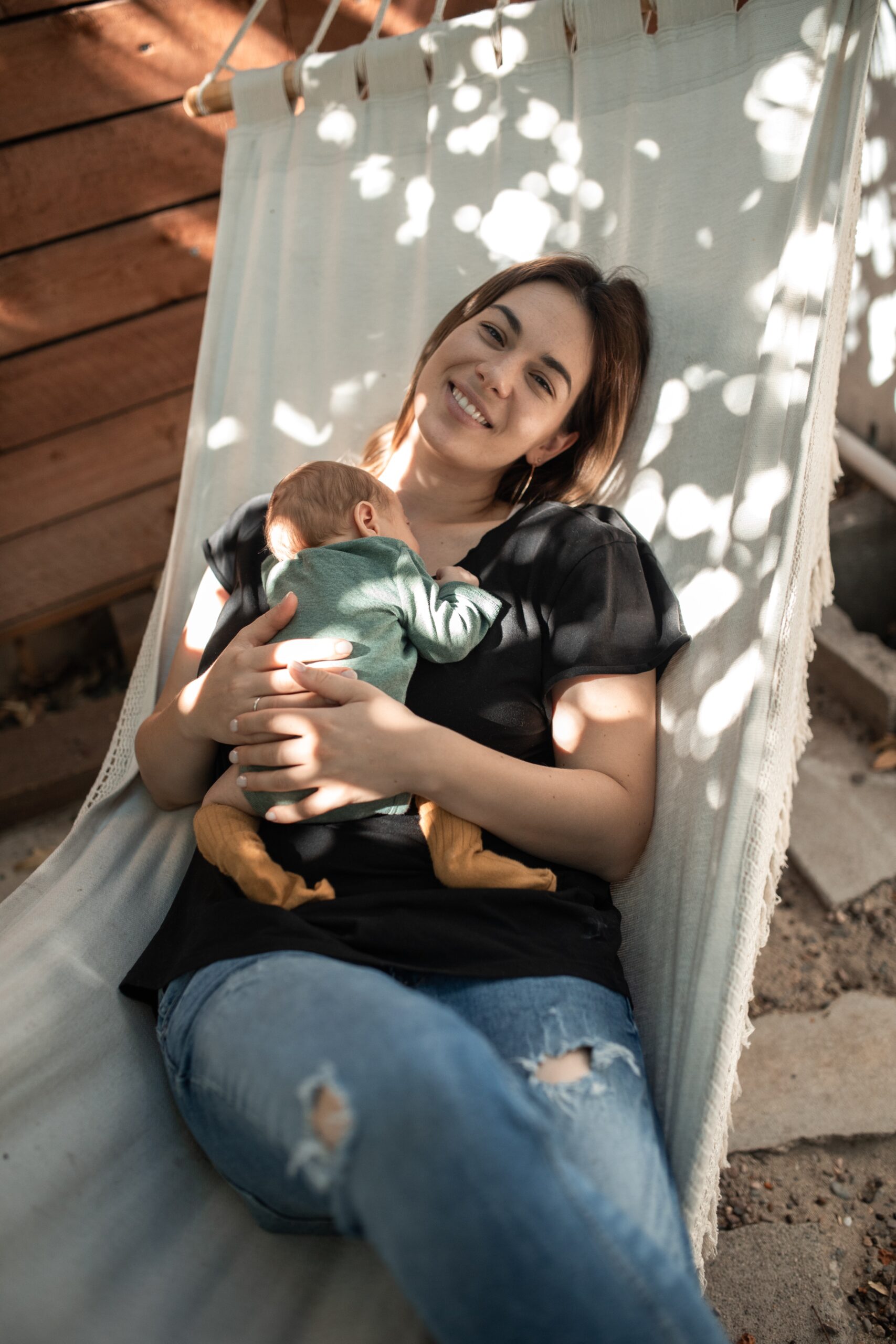 How does a cranial remolding orthosis work?

The goal of the cranial remolding orthosis treatment program is to provide effective and progressive realignment of the skeletal structure to develop and maintain functional competence, provide total contact the areas where growth is to be constrained, and allow space in the areas where growth is desired.  There is a critical window of opportunity, specifically between 4–12 months of age, when the head is actively growing.  The symmetrical helmet creates a pathway for growth to occur.

At Peak Prosthetics we use sophisticated scanning technology to capture and create an exact digital replica of your child’s head shape.  This information is processed in a cloud-based system with limitless processing power to ensure optimal results and quick fabrication time.  During your initial visit we will discuss treatment options, take measurements and a scan to determine the exact shape of your child’s head.  We will review together the findings and observe a digital image from the scan of your child’s head.  If a cranial remolding helmet is warranted, we will discuss treatment timeline and goals.

The finished cranial remolding helmet will be fit in two weeks of the initial scan.  At fitting your orthotist will make adjustment and modifications to the fit to ensure comfort and proper function.  You will be instructed in the use of the helmet at home with your child, and a wearing schedule will be established.  Treatment usually consists of 23 hours per day with breaks for bathing and changing for 3 to 6 months.

Give us a call to schedule your free sonsultation. You will see firsthand that we’ll take good care of your child.

Bossing: An area of prominence

Occipital Plagiocephaly: An area of flattening in the occipital region.

Frontal Plagiocephaly: An area of flattening in the forehead or frontal region.

Facial Asymmetry: Difference in the bony and soft tissue structure of the right side compared to the left side of the face.

Deformational (or positional) Plagiocephaly: refers to a misshapen (asymmetrical) head (cranial) shape from repeated, prolonged pressure to the same area of the head.  Plagiocephaly literally means “oblique head” (from Greek words “plagio” for oblique and “cephale” for head). Deformational Plagiocephaly is the most common type of Plagiocephaly.

Torticollis: Shortening of the sternocleidomastoid muscle. Present in 80-85% of deformational plagiocephaly.

Craniosynostosis: is a birth defect characterized by the premature closure of one ore more of the fibrous joints between the bones of the skull (called the cranial sutures) before brain growth is complete.